Last year, I bought a pair of earrings at auction. They were listed as being antique which is usually a sign that the auction house is uncertain about the era in which they were made but is confident that they are at least over 100 years old. As you can see from the photos, they are a little battered, with a design that is reminiscent of girandole earrings from the Georgian era.  They have been repaired at various stages of their life. So how can they or any other pair of antique earrings be dated? There are five things to look at when trying to date earrings – hallmarks; earring findings (that is, shepherd hooks, clip backs, screw backs, etc); the design; metals used; and the cuts and other aspects of the gemstones, if any.

First, hallmarks.  The earrings have no hallmarks, which is not a surprise. Most antique jewellery, except for mourning rings, will not be hallmarked.

Second, the earring findings. Pieced ears have been the norm for many centuries except forca period from 1910 to the 1960s. Fittings for non-pieced ears really only existed for this short time, although there are still some being made today. When I purchased the earrings, they had screw back ear findings for non-pieced ears. Patents for screw backs for non-pierced ears were first granted in 1894 but they did not become commonly used until after 1909. In this case, however, it was clear from the hinge base for the original ear findings that the screw findings were a more recent addition and that the earrings would originally have had hook fittings for pierced ears.

Third, the design. The design of earrings can be matched to particular eras and centuries. Reference books and museums provide wonderful sources for examining jewellery over time. As I mentioned above, I originally thought the earrings looked a little like girandole earrings which have a large central stone surrounded by dangling smaller ones but looking at my earrings, they are not as refined a design as girandole earrings and the workmanship is not as fine.  It is possible that the circular gold centres were enamelled as there are traces of white enamel in a couple of places on one earring. Searching my reference books and online, I found some similar designs. Have a look at the Roman emerald earrings in the John Hopkins Archaeological Museum which date back to  the 1st-3rd centuries BC (http://archaeologicalmuseum.jhu.edu/the-collection/object-stories/archaeology-of-daily-life/jewelry/emerald-earrings/).  Another similar pair, which were described as Ottoman emerald earrings from about 1690, can be seen at this site  (https://www.peterszuhay.com/ads/seventeenth-century-ottoman-emerald-earrings/). Another pair of Ottoman earrings, this time with rubies instead of emeralds, can been seen at this webpage (https://www.pinterest.com.au/aktolgahan/osmanl%C4%B1-tak%C4%B1lar%C4%B1/?lp=true).

Fourth, the metal. What the item is made of can assist identify it. Platinum, for example, was really only used from the late 19th century while white gold is a  20th century development. Early English and European jewellery was generally 18ct but the gold in these earrings tests at 22ct gold. The earrings are made of a mixture of gold and metal. 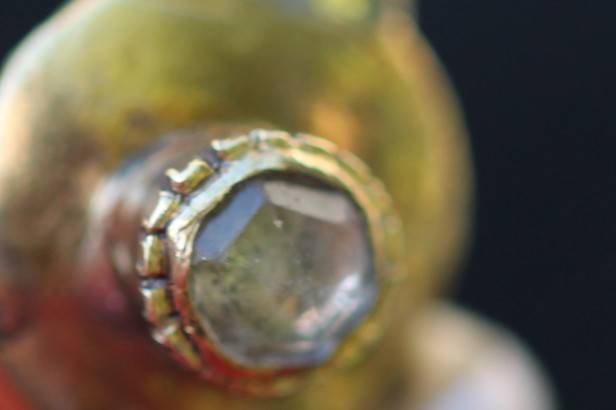 Finally, the gemstones used in a piece can assist with dating.  Laboratory created gemstones and cultured pearls are examples of this. These earrings have emeralds, diamonds and pearls.  The central diamonds are quite worn but appear to be very basic rose cut cuts with six facets or a version of a point cut. Point cut diamonds were used in jewellery up until the end of the 1500s while rose cut was developed in the 15th century and was used up until the 19th century. The pearls are natural pearls. The emeralds are polished pear-shaped drops with lots of inclusions.

So dating and identification of earrings can involve up to five steps in most cases. There is always a possibility that they may be reproductions, with quite a few Victorian earrings being reproduced using old design books.

Can I date these earrings? I am not yet able to do this. They are clearly very old, at least 17th century, but may be older. The design and the gemstones demonstrate this in particular. I need to do a bit more research, though, before I can reach a final decision.